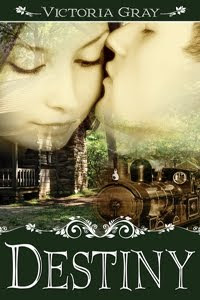 
Call in the cavalry! My new release, Destiny, features a cavalry officer tasked with a most unusual mission. When I plotted the story, I needed a hero capable of undertaking an unorthodox assignment – he had to be able to think on his feet, possess reconnaissance ability, know his way around a variety of weapons, and he had to be a skilled horseman. It seemed only natural to make my hero a cavalry officer.

A common image of nineteenth century warfare is that of soldiers charging into war on horseback, hooves pounding, sabers at the ready. This is the legacy of the cavalry. The U.S. Cavalry was a branch of Army service known for their skill as horsemen and soldiers. Cavalry soldiers played many important roles in warfare throughout this country’s history. During the Civil War, cavalry officers on both sides of the conflict assumed key roles on and off the battlefield.

In earlier conflicts, cavalry soldiers were used for offensive actions. Massive cavalry charges were used to overwhelm infantry formations. As weapons became more accurate at longer ranges, the effectiveness of cavalry charges diminished. A horse and rider were easy targets for rifles accurate to 300 yards or more. The cavalry’s role in offensive actions shifted from cavalry against infantry offenses to the type of cavalry against cavalry action seen during the first Battle of Bull Run.

Cavalry soldiers were often tasked with defensive actions to delay offensive attacks and to carry out long-distance raids. Famed Confederate cavalry officer J. E .B. Stuart’s raids against the Union Army of the Potomac in 1862 during the Peninsula Campaign and the Maryland Campaign brought him renown in the South, while Union General Benjamin Grierson’s long-range raid in Mississippi offered strategic support to Grant’s army in Vicksburg.

During the Civil War, cavalry soldiers assumed a key role in reconnaissance and counter-reconnaissance. With their mobility and speed, the cavalry served as the eyes and ears of Union and Confederate generals. They were also utilized to raid enemy lines of communication, supply storehouses, railroads, and to conduct guerilla warfare.

Destiny’s hero, Major Jack Travis, is a cavalry officer tasked with an extremely unusual mission: protect the runaway daughter of a Northern senator by beating her would-be abductors to the punch. Jack Travis is an expert horseman, a crack shot, and an experienced raider who’s none too happy about his new roles: captor and bodyguard. He should be in the field, not stealing a runaway bride from a train to keep her out of the hands of her father’s enemies. The by-the-book officer finds his captive is anything but the plain, mousy woman he’d been told to expect. Emma Davenport is beautiful, intelligent, feisty – and forbidden. He’ll risk his neck to protect her, but how can he protect her from himself?

The real-life soldiers of the United States Cavalry were my inspiration for Destiny’s hero and his partner, Steve Dunham – who finds his own heart on the line in the sequel to Destiny, Angel in My Arms, due to be released in November by The Wild Rose Press. Cavalry officers fought valiantly, provided crucial intelligence, and were often viewed as a first line of defense against opposing forces…all of this, while exposed to enemy fire on horseback. These brave men were real American heroes, regardless of whether they wore blue or gray.

Posted by Clarissa Southwick at 5:31 PM