Find the Hero; Find the Villain

The back cover blurb of nearly every romance novel I’ve ever read clearly identifies the hero and heroine. Without even opening the book, you know the names of the two people who will overcome whatever obstacles lie between them to live happily ever after. On the back cover of my recently released World War II romance novel, In the Arms of the Enemy, there is a description of one woman (presumably the heroine) and two men. No, this is not a ménage à trois. All I will tell you is that one of those men will end up in the heroine’s arms in the end, but I’d like to keep you guessing which one he is as long as possible.

One heroine, two possible heroes? Is this fair? Am I teasing the reader and violating some unwritten rule of the romance industry? One of the things I love about my publisher, The Wild Rose Press, is that they are willing to take a chance on a plot that is a little “outside the box.” Traditionally in romance fiction, one man and one woman is the preferred formula. It is not that In the Arms of the Enemy has no hero. I just want to keep the reader in suspense for at least a little while as to which man he turns out to be.

It may also be unclear at the start, or even at the finish, who the villain is. Villains are not required for romance novels, though one is often present and he or she can be quite nasty. When people ask me, “Who is the villain in your book?” I don’t have an easy answer. There are at least a couple of characters you may find unlikeable, but I wouldn’t describe them as villainous. Like most real folks we know, my characters are a combination of good and bad, though some may have a little more of one quality than of the other. Who is the villain? If I must name one, then it’s the war itself. The individuals in my novel find themselves thrown into the abyss of the Second World War and watch as friends and loved ones are brutalized or killed. All struggle for survival, while fighting for their respective countries and their principles. And in some cases, the battle is between principles and country.

Most Americans have no difficulty identifying the “bad guys” of World War II. In works of genre fiction intended for an American readership, the villains typically are either German or Japanese, depending on the setting. Italians, the third major partner in the Axis alliance, usually get away with less blame, at least in American genre fiction. (Ethiopian World War II genre fiction may have a different take on that.) The Italians surrendered in 1943 after the Allied invasion of Italy, and German forces occupied the northern part of the country. The Germans met with the staunch resistance of Italian partisans, and brutally punished Italian civilians in retaliation for partisan attacks on their troops. The Italian Resistance against the Nazis, though not as well known as the French, makes the Italian people more sympathetic to Americans. There was a German Resistance, too, but it is less well covered in popular culture, the 2008 Hollywood film Valkyrie notwithstanding. (I can’t tell you whether there was a Japanese Resistance because I haven’t researched the Pacific theater of war as I have the European.) 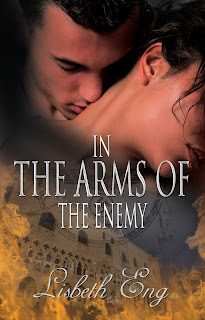 In the Arms of the Enemy is set is northern Italy, and all of my characters are either German or Italian (some of the Italians are Fascist supporters of Mussolini while others are members of the Resistance). Not all of the Germans are Nazis. But don’t expect nationality or uniform to help you distinguish good guys from bad, heroes from villains. You may even find yourself sympathizing with a character you thought you wouldn’t like. All are first and foremost human beings, and I prefer to focus on individuals and their admirable qualities as well as their flaws. Most of us have an assortment of both.

But I promise I will not disappoint you, the ardent romance reader. I have created and will reveal a hero and heroine for you to care about and cry for, a man and a woman who draw you into their lives and touch your heart.

An English major in college, Lisbeth Eng has also studied Italian, German and French. Lisbeth is a native New Yorker and has worked as a registered representative in the finance industry for the past 25 years. Her first novel, In the Arms of the Enemy, is available in e-book and paperback at The Wild Rose Press. Lisbeth invites you to visit her at www.lisbetheng.com.

Posted by AvonLadyJerrica at 5:00 AM