Can I help it if I have an over active imagination? If I’m not being bombarded by story lines outside the manuscript I’m supposed to be working on, I’m daydreaming about the places I write about. Fantasizing about winning the lottery (with imaginary ticket), packing up my family, and moving to the UK would be bliss (except maybe during winter).

You see the longer I write and research regency England the more I want to travel. The bonus for me is my DH wants to come with me so I’ve got no obstacles bar winning that pesky lottery. (Must rush out and buy that ticket)

We think, DH and I, that a six month sojourn to our ancestors birthplace would be a lot of fun. So far I’ve corrupted him into watching Time Team, National Trust: National Treasure, Antiques Roadshow, and any BBC produced documentary that I find. Even our youngest boy is keen on the move – although might have something to do with the delusion he’s under that he might acquire *awesome stuff* from an obscenely large lottery win.

Apparently we can’t work in the UK even if we wanted to—there goes our plan to polish the Queen’s silver. Our ages are apparently the issue, so we’ll just have to spend all our time sightseeing! How bad is that?? LOL. Good thing I can write anywhere.

Although I quite like the idea of staying in quaint little pubs and inns, my husband has the idea to put us in a campervan of some description for some of the time. We could become gypsies while we travel the wilds of the English countryside—let’s hope we don’t become permanently lost. But that got me thinking that I should probably start to plan where we’d actually want to go on this six odd month odyssey of ours. So that’s what I’m going to blog about for a while.

After the twenty-three hour flight from Sydney, spending a few nights at a hotel near Heathrow recovering from jet lag seems like a very good idea. Then once we’re relatively lucid again the plan is to gather all our pounds and pence and head south in the general direction of Brighton. 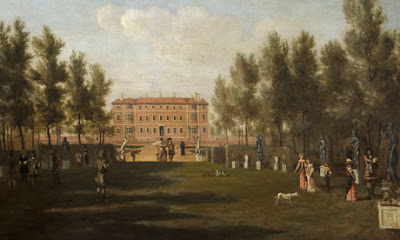 Ham House, in Richmond, Surrey, is a 400 year old stately home built along the southern bank of the river Thames and a short 30 minute drive from Heathrow Airport. Ham boasts opulent rooms, priceless paintings, porcelain and furniture, and a glimpse of 17th Century courtly life. Once home to Sir Thomas Vavasour, Knight Marshall to King James I, the property passed through various hands, including the Duke and Duchess of Lauderdale, until 1948 when it entered the care of the National Trust. 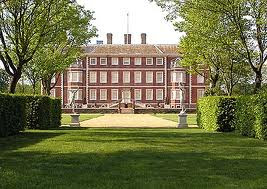 One interesting fact I discovered was that Ham House was the first home in Britain during the 1670’s to have sash windows installed (Good to know if you write Georgian or Regency set novels). Because of its beauty and relatively unchanged interiors the house has appeared frequently on film—the 2007 BBC television adaptation of Sense and Sensibility (in which it played Cleveland), and in the films To Kill a King and Spice World, and also the movie The Young Victoria (where it doubled as Kensington Palace). 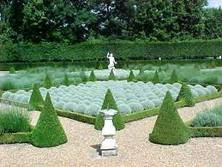 When the trust took over management the gardens still boasted the skeleton structure of the 17th Century gardens and those have been restored beautifully. Given the opulence and care previous owners placed on furnishing Ham, it is not surprising that it was a popular social center—guests traveled by river craft often since the roads were so bad.

From today’s research I must remember to look carefully at:

* The paintings on the Great Staircase
* The cabinet pictures and miniatures of the Green Closet
* The Duchess’ bathroom – it dates back to 1677 (Yes, the duchess was ahead of her time – she bathed!)
* Walk beneath the hornbeam arch—a beautiful living tunnel 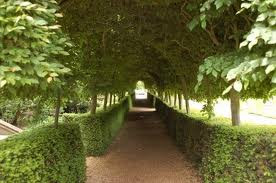 Ham House and its gardens are open to visitors between March and November. If you’re thinking of dropping in, be sure to check the National Trust website for specifics before you go.

Have you visited or plan to visit England? DH and I would love to hear your recommendations for places to visit. We don’t want to miss a thing on our wishful thinking tour.