Thanks to Jerrica Knight-Catania’s earlier blog this month about ghost stories and the mention of a Ouija board session she and a friend had years ago, one of my friends (who will remain nameless to protect the innocent) decided it was something we should do. However, neither of us really wanted to do so in our own homes. Yes, we’re chickens (or I’ve watched one too many “haunted” themed shows on A&E, Discovery and the Travel Channel over the years). Luckily, we were both headed to Washington DC last weekend and agreed that having a “session” at the hotel was preferable to having one where either of us live.

So we rounded up a couple friends who were also going to be in DC at the same time and planned our secret rendezvous. None of us owned a Ouija board. So the first thing we had to do was purchase one, which is easier said than done living in the Bible belt; but we persevered (even if the friend who made the purchase did get a lecture from the woman behind her in line and a dismissive once-over from the employee at the check-out register.)

I’m still a little bit of a chicken and even though I had a fairly good sized suite with a sitting room adjacent to my bedroom at the hotel, I wasn’t all that keen at having the “session” where I was going to sleep. Luckily, I had access to one of the meeting rooms at the hotel, so the six of us planned to meet there around midnight last Friday.

Yes, six women – all in our thirties. But things soon went awry. Two of our friends went to Georgetown for drinks and sent a text saying they “hoped” to make it back in time. And two of the others got in spat with each other and weren’t speaking. So we were down to only two of us who met at the appointed time and place. The meeting room we borrowed was dimly light with dark walls. Ambiance was certainly not a problem. 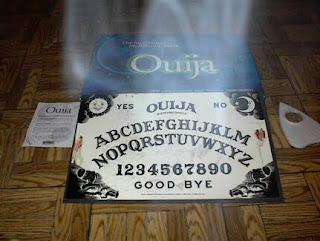 No. The problem was us. We’re completely silly with no idea what we’re doing. All of this was a lark more than anything else. So we unwrapped the “glow in the dark” Parker Bros. Ouija board and put the black rubber feet on the little plastic thingy. (Yes, thingy – we’re not terribly technical and I have no idea what to call the little device you put your fingers on. So “thingy” will have to suffice.)

And while we’re doing all of this… a hotel employee jiggled the handle to our borrowed space, nearly making us jump out of our skin. My friend managed to toss the box, board and thingy under the long tablecloth before the door was thrown open and exterior light poured inside the room. I made up some lame excuse for why we were sitting in the dark (I actually don’t remember what I said, but I remember my adrenaline racing). And the hotel staff shut the door to the room, leaving us alone.

Of course my friend and I then broke out in a peel of laughter and she said, “You know he thinks we’re in here making out.” And that only made us laugh harder. Finally, after bringing our levity back under control (somewhat), we actually started trying to use the board.

We were not terribly successful. It was either user error, it’s all bunk, or some other weirdness. We made contact with some entity. Maybe. Who knows? I mean what kind of name is Zazos?

Just as we were wrapping up and had decided we’d given it our best shot, our two friends who’d gone to Georgetown showed up. And we tried one more time. One of those girls made “contact” with her deceased aunt and had a very moving moment.

I don’t think anyone there moved the thingy on purpose, I truly don’t. If I was laying odds, I think it was a combination of a collective subconscious and tired arms that weren’t allowed to rest on the table that was responsible for making the thingy move across the board.

Still, my friend who had the “moment” with her aunt seemed very moved by the whole event; and if that brought her some peace, I’m glad she was able to experience it – even if she only has her own subconscious to thank/blame.

What do you think? Do you think making contact with “the other side” is bunk or reality? Have you ever experienced something other worldly that couldn’t be explained?
Posted by Ava Stone at 1:00 AM