I am so thrilled to introduce you to Sonali Dev: 2013 Golden Heart Finalist and upcoming debut author with Kensington! She writes Bollywood romances--how cool is that?!? 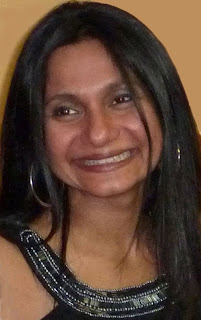 SONALI: Hey Hanna, thanks so much for having me!

HANNA: Absolutely my pleasure. I was immediately struck by your writing and subject matter when I was a lucky ducky and got to read your manuscript months ago. Let's start the questions!

Tell us about your books!

Ah my books! Trust you to make me smile like a goofball right out the gate, because this is only my favorite thing to talk about. My debut novel, The Bollywood Bride, comes out November 2014 from Kensington. It’s the story of a Bollywood star, Ria Parkar, who has sold her soul for stardom. But she would do it again to keep her promise to her dying father, and to protect the man she loves from the insanity in her genes.

Vikram Jathar chased Ria across the globe once and lost everything in the aftermath of her betrayal. It’s taken him ten years to rebuild his life and he’s determined never to lose it again.
When a scandal in Mumbai threatens to expose Ria’s past, her cousin’s wedding in Chicago seems like the perfect place to hide out. Only, reuniting at a big colorful Indian wedding surrounded by everyone they love rips right through the tangle of lies and takes the two of them right back to everything they've been hiding from. The wordless bond that has always tied them together remains untouched, and the searing chemistry all but sparks them back to life. But even as Vikram unwraps her body from the silken folds of her sari, he might be unraveling secrets that could destroy them both. Now they must find the courage to heal the past and risk everything on a seemingly dark future a second time around.

[ummmm Hanna butting in here: "...unwraps her body from the silken folds of her sari..." YES PLEASE]

My second book, The Bollywood Bad Boy, just finaled in the Golden Heart and comes out in 2015. That one is the story of a child bride, Mili Rathod, who grows up and finds she's married to the wrong man. Although Mili has been bound by marriage since she was four years old, she's experienced the kind of freedom other girls in her village in India only dream about. All because her grandmother raised her to be a modern city wife. So when the husband she's waited twenty years for shows no sign of coming to claim her, Mili grabs the chance to come to America on a scholarship to fulfill her other dream of getting a higher education.

Filmmaker Samir Rathod is perfectly happy being Bollywood's favorite bad boy. He has never wanted to be a hero. But he will do just about anything for his own hero- his big brother, even travel halfway across the globe to take care of the 'wife' who just crawled out of his brother's past.

When Sam tracks down his brother's wife, he finds that Mili isn't quite the simple village girl he planned to bully into signing annulment papers. She's a whirlwind, who sucks him into her roommate's elaborate elopement, complete with enough drama to put his films to shame. Before he can gather his wits or the guts to yank her dreams from beneath her feet, she's got him drowning in her onyx eyes and forgetting what a jaded bastard he really is.

Unfortunately, she fancies herself in love with his big brother. Sam and Mili must learn the difference between what is real and what they've been brought up to believe and reach for a love that turns tradition on its head.

I must add here that both these are working titles and both books will be released under different names. So, stay tuned.

For those readers who may not know, can you explain the Bollywood setting of your books?

Geographically, a large portion of my books play out here in America although my characters tend to romp across the globe. The Bollywood Bride is set in Chicago, Mumbai, India, and Bristol, England. The Bollywood Bad Boy takes place in Ypsilanti, MI, which is a small university town adjoining Ann Arbor, and in Mumbai.

Character wise, my protagonists usually work in Bollywood, which is the popular term used to refer to the Indian film industry housed in Mumbai (formerly Bombay). In terms of number of films made per year and fan-base, Bollywood is the largest film industry in the world.

As I mentioned before, in the first book my heroine is a Bollywood star. In the second one my hero is a Bollywood director. So we do get to visit this world from the inside.

The third piece of my setting is the style. I see my books as written in the 'Bollywood style' reminiscent of the large sweeping family sagas Bollywood tends to make. A wide-angled shot of what I see as the essence of being Indian. It’s the dramatic, just this side of melodramatic. It’s families that have no boundaries, no concept of privacy, love that makes choruses burst in your head. It’s beautiful people in beautiful places, but also the smell of the most wretched sewers. It hops around the world but is tied to the traditions of an ancient land. It’s the clash of the oldest culture in the world warring with the most modern values. 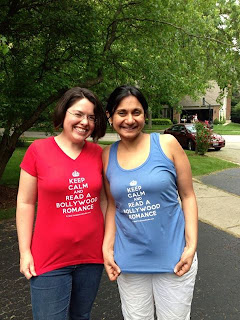 Why does this particular subject/setting speak to you?

The easiest answer is that I was born and raised in India in your typical close-knit Indian family with the most a-typical thinkers. Where traditions that involved putting your family before all else were coded into my blood, but where the place of women in society and my own role as a woman was anything but traditional. Consequently, I feel just as strongly about the strength of familial bonds as I do about freeing women from the sometimes corrosive and regressive rules of my culture. And I'm more than just fascinated with exploring how we can walk the fine line between the wonderful security of family and the independence that every individual needs to meet their full potential. I have no choice but to dig into this in my stories.
As for the Bollywood part, I was raised on a staple of both Bollywood and Hollywood films and I have a lot of friends and family who work in the film industry, so it is a world I feel very comfortable with and not in the least awed by.

Can you tell us about your path to publication thus far?

I want to say it's been long and hard. But really, I've enjoyed it so very much I would be lying. I've written my entire life. And although I wrote and directed my first play when I was in fourth grade I mostly wrote to hear the sound of my own voice until about ten years ago. Until then it was all about expressing my opinions. Then ten years ago I got sucked into writing scripts for movies by my best friend. After that I was hooked on creating characters and putting them through the ringer to explore my own issues with the way the world works. As for publication, once I had completed my first manuscript some three years ago, I joined the RWA and with the help of my local chapter (The Windy City chapter) I went after it with everything I had. I took classes to learn how to write queries and synopses, how to revise, rewrite, polish and submit. I literally pitched and queried it until my pitching and querying limb was ground to a stub and the scabs on my rejection limb resembled bedsores on the dying. Finally after two years of this, I pitched my story to my editor in the middle of a spotlight at the Chicago Spring Fling conference and got a very enthusiastic request. I did another few rewrites after that, because Kensington was exactly where I saw my book. And the rest as they say is history (or at least will be some day).

What's your favorite part of the writing process? Your least favorite?

Gosh, this is a tough one. I love it all. I love dreaming up the characters. Love how they come to life inside me and haunt my dreams. Love dumping the story out in the first draft. Love grinding and chiseling it as I revise and polish. When I'm not actually suffering from the terror of it I even love the panic of plotting when I have no idea what on earth is going to happen next.

What I hate most about the process is the having to shuttle between the real world and the world of my book. I understand that there is real life and that in the grand scheme of things that is what really matters. But I find switching between the modes of writer and functioning citizen of the world extremely disorienting. Then again, even that I love.

What are you working on right now? What's next?

I'm currently working on book three. And it is undoubtedly the hardest book I've written thus far. It’s darker than my first two books and explores healing from unspeakable tragedy and moving on and finding not just survival but happiness again. And it is totally kicking my butt right now. If I do get through writing it, next on the cards is working on the edits for my first two books. I do have the ideas for the next few books as well so those need to be developed and explored. I've also always wanted to write modern interpretations of the great Indian myths. Oh and raising my two teenagers and making sure they, like my characters, turn out fully developed, capable of happiness, and maybe even a wee bit overachieving.

Thank you so much, Sonali!

How to get in touch with Sonali: