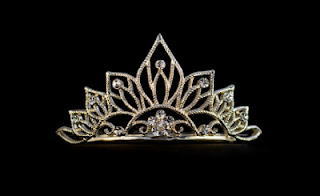 The Lady Scribes are pleased to welcome another of our favorite authors, Aileen Fish, as a regular feature blogger. Here's her debut blog:

I have come to the conclusion the main problem with our country is the serious lack of tiaras worn by our public figures.

Seriously. I mean, I know you can pick up a nice rhinestone do-dad at David’s Bridal, but I’m talking the glorious, intricately designed, ostentatious head jewelry like you see in the wedding photos of the titled and royals of Great Britain and Europe.

Through Eloisa James’ Facebook post recently, I came across this list. Somehow I had the idea each princess had one tiara, but it would appear that’s way off the mark. Tiaras are handed down to the next generation, and sometimes altered to suit changing times or different tastes.

Among the ones I found at the Order of Splendor site were a few I’d love to own. I think my first choice would be the Portland Sapphire tiara. But of course, I’d need Diana, Princess of Wales’ engagement ring to go with it.

The Baden Fringe Tiara reminds me too much of the Statue of Liberty; I’d be too tempted to wrap myself in a sheet and carry a torch.

Aren’t they all to die for? Do you have a favorite tiara? Where would you wear one if you had it? I’m thinking we need to change the dress code for Lady Jane’s Salons to include them.
~~~
There are no tiaras worn in my newest release, The Incorrigible Mr. Lumley, a traditional sweet Regency romance novel, but I think you’ll enjoy it anyway!

Stubborn. Hard-headed. Single-minded. Those qualities are what make David Lumley a successful horse breeder. When he puts those qualities to work befriending Lady Joanna Hurst with less than noble intentions, he’s tenacious in his pursuit.

Lady Joanna falls fast and hard for the handsome, witty and charming Mr. Lumley after her brother’s ultimatum to find a husband by the end of the Season. He is everything she imagined a husband could be, and more. Blissfully unaware of the conflict between their fathers, she believes he’ll declare his love soon. Then she overhears a conversation between Mr. Lumley and her brother, and all of Mr. Lumley’s tenacity will be needed if he’s to win back her heart.

You can read an excerpt and find the buy links on my website: aileenfish.com

Aileen Fish is a multi-published author under several pen names, with stories ranging from historical to paranormal, and heat levels from sweet to scorching. She is also an avid quilter and auto racing fan who finds there aren't enough hours in a day/week/lifetime to stay up with her "to do" list. There is always another quilt or story begging to steal away attention from the others. When she has a spare moment she enjoys spending time with her two daughters and their families.

Do you like your romance steamier? Check out http://arithatcher.com!