Are You Ready for Halloween?

I write kind of Halloween stuff--the paranormal, ghosts, vampires, werewolves, jaguar shifters, psychics, and all that stuff that goes bump in the night. With a romantic twist, of course.


You thought I skipped Halloween, didn’t you? With releasing A SEAL Wolf Christmas early!!!

But I love Halloween, watching spooky movies with my family, eating Halloween treats!

The wizard bear in the top picture and the vampire bear featured below are my own creations. My Wilde & Woolly Bears have found homes all over the world and have won first place ribbons for best dressed bears, most unique bears and best of show. They've also been featured in several magazines. 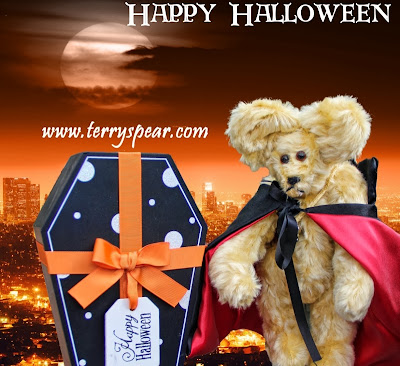 So here is a fun and easy treat to make for that Halloween night of spooky movies. Black olives cut up to look like spiders on deviled eggs! And then you can curl up with a nice Vampire romance.

And she loved him in a past life, but now the huntress has him on her terminal list.
I was outside watering and ran into him! Never seen one here before. Just the little tiny lizards that run all over my house. Inside and out. This is a Texas spiny lizard. Okay, so I have lizards on the brain. Right? I've had them crawl up my pants leg when I've writing, scurry across my feet, just all kinds of things.

So I've settled down to write after I finish watering and I'm working away, it's getting late and something crawls up my leg. Natural reaction: brush it off and then look to see what it was. Cricket maybe? Been finding a bunch of them in the house--dead. Good.
But I'm thinking one of the little lizards. It's getting really late and need to go to bed. So shut things down and start walking to the bedroom and feel something rough between the sole of my foot and my flipflop. I kick it off and off runs a scorpion. Now deceased.

I can't believe he crawled up my leg, I brushed him off AND he somehow got between my foot and my flipflop as I was walking and I DIDN'T get stung. When I lived in Oklahoma, I was stung a number of times. HATE those things.
They are way scarier than vampires.

Those hot SEALs are back with Terry Spear's A SEAL Wolf Christmas. First, they're running around in the jaguars' territory in the hot Amazon jungle, but once they've done their SEAL kind of mission, Bjornolf and Anna have another mystery to solve--A Christmas tree farm murder mystery. They don't have to deal with babies--not yet--but wolf teens, yes! And that can mean really big trouble as Silver Bells are ringing and the aroma of wassail and cinnamon is scenting the air during this special Christmas season. 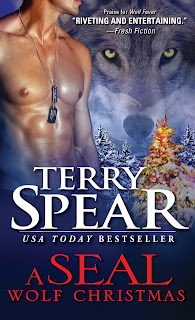 Can an Alpha Wolf Who's Met His Match...

Navy SEAL Bjornolf Jorgenson has had tough missions before, but going undercover with feisty gray wolf Anna Johnson could top the list. She drives him crazy—in more ways than one. Now he has to investigate a murder, supervise a wild teenage wolf—and handle Christmas with Anna.

Survive the Holidays with Her?

For Anna, the only thing worse than staging the perfect family Christmas is having to do it with Bjornolf posing as her husband. Anna is a serious undercover operative who isn't afraid of a fight, even with a hunky SEAL shifter. With a killer on the loose, Anna just wants to focus on their mission, but the one thing she can't fight is her sizzling chemistry with Bjornolf.

I’m off to make some deviled eggs… topped with a few spiders. Yum.

Do you have any fun Halloween treats that you like to make? Another is hotdog mummies. :) Hotdogs wrapped in a crescent roll. :)

One lucky commenter can have a copy of one of my ebooks--Huntress for Hire or Forbidden Love, your choice.

I have audiobook review copies of the following: The Accidental Highland Hero, Highland Rake, Taming the Wild Highland, Bound by Danger, The Dark Fae (teen), Kiss of the Vampire (teen), The Deadly Fae (teen). The caveat is that you haven't received a free book before through audible. But if you haven't and you'd like one, it's yours! This is for anybody and everyone. :)