Deadline brain: A term used  to describe the hyper-focused state that a writer "functions" in while completing a novel that is due (or overdue). Warning: This condition often results in ignoring virtually all other responsibilities. 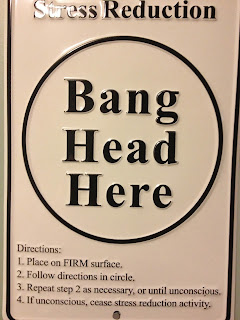 1. Excessive coffee consumption which continues past the usual morning dose. If a straw is left in an empty coffee pot--this is a dead giveaway.

2. A change in social media involvement. For many of us, social media is a viable and highly important tool for marketing and as a result we can be a constant presence online. However, when Deadline Brain takes hold, our posts become practically non-existent. You may see posts from our friends asking if the author is still alive or have we been trapped under something heavy. (Like the weight of the unfinished book.)

3. The local pizza place/Chinese take-out joint/McDonalds is more familiar with what our children want for dinner than we are.

4. Showering or getting dressed in actual clothing seems like far too time consuming a task. When asked about our unusual appearance, we mutter something about needing to write another 5k. Then  refill the coffee and shuffle back to the blinking screen in the office.

5. Phone messages. Emails. Texts. Yeah, right.  Don't count on having those returned until the manuscript--which a writer may fondly refer to as the crappy book (or something equally charming)---is finished and turned into the publisher.

6. When we finally do step away from the manuscript (for a few moments to join the rest of society) it's probably not a long lived scenario. Chances are that in the midst of a conversation/TV show/ song, we may shout something unintelligible and go running back to the computer muttering that we finally know what happens next. (We don't expect you to get it and don't ask because we may growl or hiss upon retreat.)

8. The office, or possibly even the house,  may strongly resemble Gray Gardens or  that house in Jumanji after the elephants, zebras and monkeys had a crack at it. Take your pick. Either way it's probably a hot mess.

9. There is no such thing as really clean laundry. An author with Deadline Brain may revisit the "levels of clean" that many of us found acceptable when we were in college. ie: the sniff test.

10. When those moments of lucidity strike us, and we come up for air, the first words out of our mouths to our loved ones are... "Thank you." However, as we look at your sweet faces, guilt hits us as we realize that we've most likely been living in our book instead of in our own life...at least during deadline madness...and we know we wouldn't be able to make it without the people who support us in spite of the fact that we talk to people who aren't really there. So we kiss our kiddies goodnight or brush a kiss on the hubby's cheek. This exchange is probably immediately followed by, "I'll be up as soon as I finish this scene." (Yeah...that's not true and we know that you know it's not true...but we love you for not saying it out loud.)


So, if you've got a writer in your family and they suffer from Deadline Brain, give 'em a hug, order a pizza and throw in a load of laundry because have no doubt they will recover. Until the next deadline, that is.

**Disclaimer: I am currently suffering from the condition described above. Please forgive any grammatical errors or flagrant misuse of punctuation.**