I'm very happy to have my good friend and former Lady Scribe Catherine Gayle with us today. She has been a busy lady since we last heard from her, writing more of those wonderful Regency romances readers love AND creating the most fantastic contemporary romances. I could gush over her Portland Storm series forever, but I know you all would rather hear from Catherine. So let's jump in, shall we?

Welcome, Cat! Most of your readers probably already know you began your writing career as a Regency historical romance author before venturing into contemporary romance. Can you tell us a little about how this transition came about, and if you see yourself returning to historical romance some day? 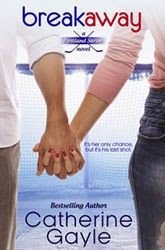 CG: It happened completely by accident. I’ve tried writing in other genres before, and each time I’ve failed spectacularly. In fact, the failures have been so epic that I was convinced I could never write anything contemporary. But one day, when I had a deadline looming on a historical novel that was giving me fits, I saw the opening scene to BREAKAWAY in my mind. It was so clear and so completely fleshed out that I decided to take an hour and write it down. As soon as I did, I sent it off to some friends who also write contemporary romance and asked them to be brutally honest with me. I fully expected them to tell me it was awful, I had no business even attempting to write something like that, and I needed to burn it and get back to work on my historical. That didn’t happen. In fact, the general consensus was that I needed to ditch the historical (at least for now) and write what became BREAKAWAY. And I did. Three weeks later, I’d sent it off to my editor, and already had fully-formed ideas for at least a few more books in the Portland Storm series.

I’m not completely abandoning historical romance. In fact, I just finished my next historical novella, A DANCE WITH THE DEVIL, last month. It’s with my editor now, and it should release later this month. I did write a few hockey stories in a row, because I was launching a new part of my career and felt it was imperative to get enough books out there to build up a bit of an audience. But now my plan is to alternate between the two worlds so that I can keep my historical readers happy as well as my contemporary readers.

I am absolutely in love with your Portland Storm hockey team and I’ve never watched hockey in my life. I love that a non-sports fan like me can still be so hooked on your stories. I have my own ideas, but what do you think makes your stories so universally appealing?

CG: In my opinion, it’s that these books aren’t just about hockey. The hockey team is a key component and it’s what holds the books of the series together, but there is always a much bigger, real life theme running through the books. I tackle some of the uglier parts of the real world in this series—rape, panic attacks, incest and molestation, and cancer, and who knows what else I’ll tackle in future books—and I don’t handle them in a hands-off kind of way. I try to really delve into the emotional turmoil involved, and help the characters dig their way out of it. Hockey is just a fun counterpoint. J

One thing I really appreciate about the books is I feel I get to go backstage with the players and learn about a fascinating world I knew nothing about. How much research did you have to do learn about the ins and outs of how the hockey leagues operate?

CG: In all honesty, I’ve been doing this “research” without realizing I was researching for years. I’ve been a hockey fan since I was a kid. I watch games, I watch behind-the-scenes shows, I read hockey blogs, read books about hockey and written by former hockey players, I watch hockey movies… That’s been a pastime and mild obsession of mine for years. In the last decade, the NHL has gone through two lockouts—the opposite of a strike, where it’s the team owners saying the players can’t come to work—and through those I’ve learned a ton about the inner workings of the League. It’s just been what I do for fun. LOL.

Your third story, TAKING A SHOT, is being released April 10th as part of the anthology SEDUCED BY THE GAME and I can’t wait. That is all. I don’t have a question. I just want you to write faster. LOL JK! I would like to know which characters are dearest to your heart and if you had more difficulty writing one book over the others. 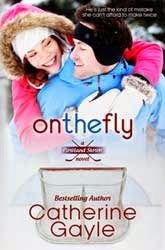 CG: Hmmm… Well, out of my heroines, I’d have to say that I relate most to Dana Campbell from BREAKAWAY. I always steal a bit from myself or the people in my life when I’m creating characters, and Dana suffers from panic attacks as a result of rape, just like I do. Out of all my heroes so far, Jamie Babcock, aka Babs, is my favorite. He quite simply is the bee’s knees. I love writing him, and so far he’s played a pretty good-sized role as a secondary character in every book where he hasn’t been the hero. Another supporting character, Tuck Shaw from ON THE FLY, however, is probably my favorite character in the whole series. I stole a lot from my nephew in creating him, and I’m sure that plays a big role in why I’m so in love with this little guy. That said, the character became much different than I envisioned him being when I first started planning him, and he became quite a scene stealer. I didn’t mind too much. I have to say that so far, I haven’t really had difficulty writing any of these books—beyond the fact that I get so emotionally invested in them that they make me cry! LOL.

CG: The third story, TAKING A SHOT, is just a novella, not a full novel. I’d say it’s book 2.5 in the series (I’m writing book 3 now). As I said above, Jamie Babcock has played a big supporting role in the first two books in the series, and everyone knows he’s got a big crush on Katie Weber, the teenaged daughter of one of Babs’s teammates. The crush is mutual, but since she’s still in high school, Babs can’t really do anything about it. At the end of ON THE FLY, we learn that Katie has leukemia. When TAKING A SHOT starts, she’s recently started chemotherapy and her hair’s falling out—just in time for her senior prom. She’s not planning to go until Jamie intervenes.

Fair warning: this story is a tear-jerker. Have a box of tissues handy. And for those who are wondering, no, it is not the only story you’ll get for Jamie and Katie. Katie is still in high school here, and she’s sick and going through chemo. She’s not ready for a happy ever after ending. Frankly, they both have some growing up to do. This is just a teaser, if you will. Just a prequel that happens well before their real story. There will be more later.

“I wouldn’t say no one would want to go with you.”
The look Jamie was giving me stole my breath and made my stomach flutter, but not like it always seemed to do lately when I was going to be sick. This was night and day from that—all crazy electricity and jangling nerves, kind of exciting instead of gross and sick feeling.
“Don’t tease me,” I said. I scrunched myself up in my seat, trying to put a little distance between us.
I wasn’t the only one who’d fallen head over heels for him pretty much the day he’d arrived in Portland. So had at least half the single girls here between the ages of ten and thirty.
He’d always been nice to me, but he was nice to everyone. If someone needed help, Jamie Babcock was the first person to notice it and do whatever was needed. Even when he’d been about to shave his head this morning, it was just because he was a nice guy.
I’d never really let myself believe anything would come from the friendship we had, even if I’d been daydreaming about him—and more than daydreaming—for two full hockey seasons now. “Don’t make me wish for things that aren’t ever going to happen. It’ll ruin my image of you.”
“I’m not teasing you. I want to take you to your prom.” 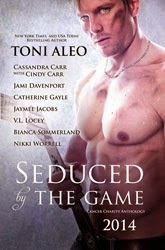 You recently were part of a hockey inspired anthology with Toni Aleo, Cassandra Carr and Cindy Carr, Jami Davenport, Jaymee Jacobs, V.L. Locey, Bianca Sommerland, and Nikki Worrell where proceeds go to Hockey Fights Cancer. Is there a connection to your Portland Storm series, or have you introduced a new team and characters?

CG: Well, like I outlined above, yes! TAKING A SHOT is book 2.5 in the Portland Storm series. The anthology, SEDUCED BY THE GAME, features 8 novellas written by the authors listed above. All of them are hockey romance. I’ve read the whole anthology, and I’m so excited to be part of it. We have some fantastic hockey romance for you! Most of these novellas are linked to the existing series that the authors are writing. And ALL of the profits from this anthology are being donated to Hockey Fights Cancer. It releases on April 10.

So my story still involves the same team and characters that my readers already know and love, but it also introduces a few new names—it takes place right after the trade deadline, and so there are some new guys on the team.

What is next for Catherine Gayle and the Portland Storm?

CG: I’m writing book 3 right now. It’s called LIGHT THE LAMP and stars Liam Kallen, a player who just joined the Storm at the trade deadline. You first meet him in TAKING A SHOT, so be sure you read that. It’ll be available in June of this year, so you won’t have to wait too much longer. I’m really excited about writing this book. So far, it’s the only book in the series that hasn’t made me cry while I’m writing it. Instead, I’m laughing. (No promises on the no crying thing, though. I’m not done writing it yet.)

Thanks so much for being with us. You know I love you like a sister and I’m one of your biggest fangirls. Kudos on the marvelous work you are doing. I hope everyone checks out “Breakaway” and “On the Fly”, so they are ready to devour “Taking a Shot”.

CG: Thank you so much for having me, and I love you, too! I’m so glad I get the chance to come back to the Lady Scribes every now and then.

QUESTIONS FOR READERS: Are you a sports fan? What sport do you think would make an interesting backdrop for a romance? (Note: You don't have to love hockey or any sports to love Catherine's books.)

GIVEAWAY: Catherine has generously offered to give ebook copies of BREAKAWAY and ON THE FLY to one lucky reader. Just leave Catherine a message and PLEASE DON'T FORGET TO INCLUDE YOUR EMAIL so we can contact you if your name is drawn. The winner will be posted in the comments Wednesday morning.

Be sure to visit Catherine's website to learn more about her books and appearances.
Posted by Unknown at 12:00 AM