I'm so excited to share an excerpt from "Always Proper, Suddenly Scandalous", Book 3 in my Scandalous Seasons series, which comes out July 2014! The hero, Geoffrey Winters, 5th Viscount Redbrooke was never intended as a hero for a full-length novel. In fact, he's been quite a polarizing figure for some readers. But Geoffrey, like so many of my characters, is flawed and none of his actions in any of the previous books were ever without reason. So he demanded his story be told...and it unfolded with an American heroine, Miss Abigail Stone. Someone that he obviously never imagined for himself!

I hope you enjoy the excerpt...and I'll be giving away one copy of "Always Proper, Suddenly Scandalous" to one commenter today! Winner will be posted on the comments section of today's blog! Thanks for reading! 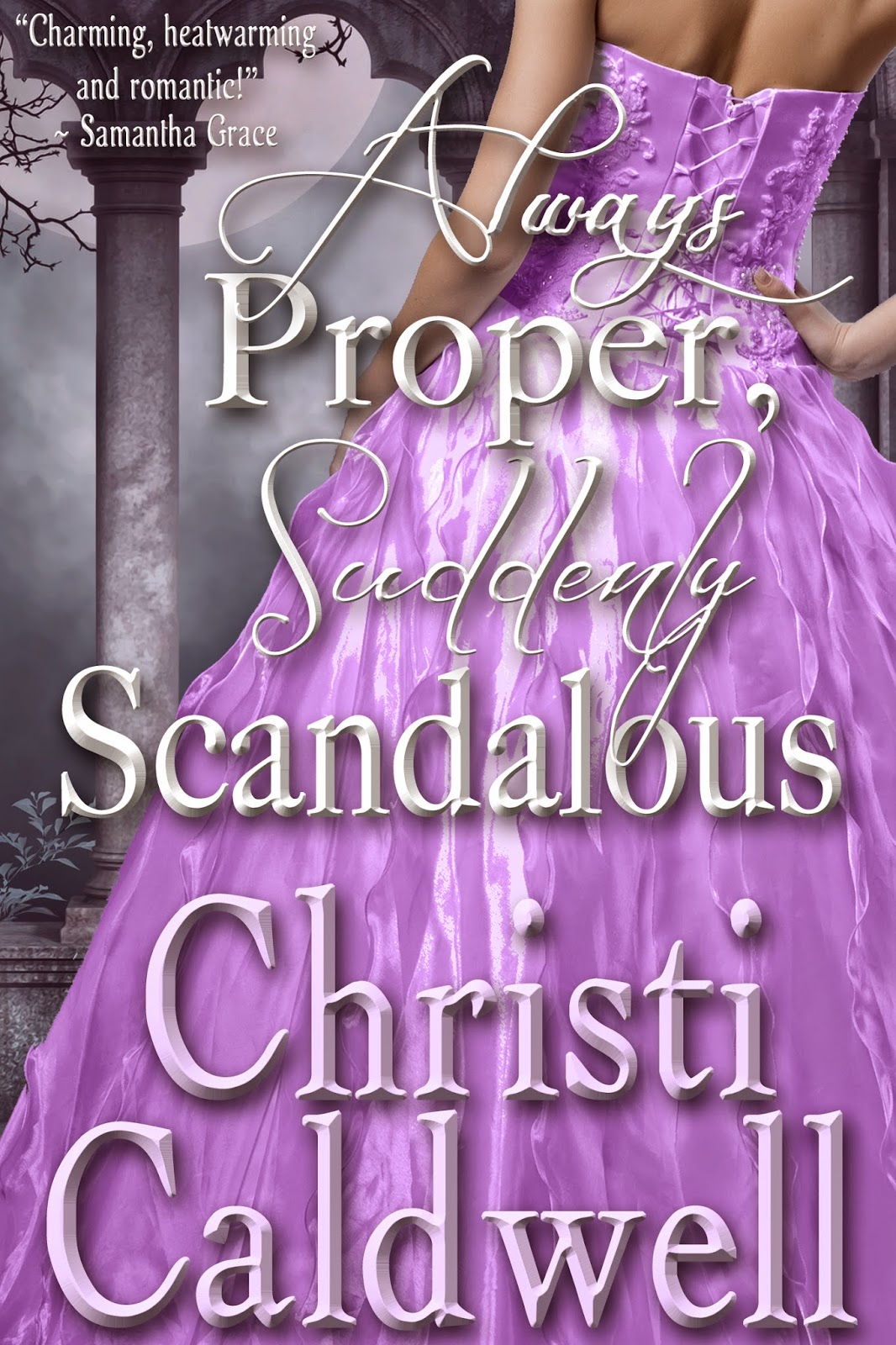 And Now the Excerpt!

Geoffrey took a step toward a liveried servant bearing a tray full of champagne. The tip of his black Hessian boot snagged upon the hem of a young lady’s skirt.

The lady gasped as he tore the fabric of her gown, and she pitched forward. Even as the glass of ratafia in her hand fell to the floor, her hip collided with the passing servant who teetered on his feet. The young man’s serving tray tilted precariously, and for an infinitesimal moment Geoffrey thought the servant had steadied his burden.

But the servant’s tray slipped from his fingers. Geoffrey made a quick grab for it, but the champagne flutes careened to the floor, and sprayed bubbling liquid onto the gowns of several nearby matrons. They cried out in shock, and scurried off with black glares for Geoffrey.

“Pardon me,” Geoffrey murmured to the servant, and then returned his attention to the woman he’d inadvertently sent reeling. A mere five or so inches smaller than his six foot frame, she stood tall like a Spartan princess.

She smiled up at him.

“Forgive me. Are you all…?”  Geoffrey's question died upon his lips. His eyes traveled the high planes of her cheekbones, the steel gray irises of her eyes, her full red lips.

…and then her slipper met the moisture upon the marble floor. Like one of the skaters at the Frost Fair on the River Thames, she slid forward, into the nearby pillar. “Ouch.”

Geoffrey’s arm shot out and he sought to steady her.

“Thank you,” she said. She shook out her sea foam green skirts and unlike the horror that wreathed the faces of the surrounding ladies, wry amusement fairly glittered in her gray-blue eyes.“I am not injured,” she assured him.

His eyes widened and with alacrity, he released her.

She cocked her head to the side. “Are you injured?”

Her flat accent did not possess the clipped proper tones of a proper English lady. He blinked. “Injured?”

“You are an American,” he blurted.

A mischievous smile played at the woman’s too full, red lips. “I am.” She looked around and then back to him. “Never tell me you’re scandalized by me being an American?”

He was scandalized by the wicked direction his thoughts had wandered that involved an American woman.
Geoffrey shook his head. If his mother was outraged at the prospect of a Scott assuming the Redbrooke title, what would she say to an American lady having ensnared Geoffrey’s attention?

“Ahh, you do smile,” the young woman said.

Geoffrey frowned. “I beg your pardon?”

“Alas, it is gone,” she said with an exaggerated sigh.

Geoffrey suddenly noted the appalled stares of Polite Society’s most respectable peers, trained upon them.

From across the room, his mother who stood alongside Lady Tisdale glared at him with blatant disapproval.

It was the much needed reminder of his past failings and inner weaknesses that had wrought much agony upon his family. By engaging this…this…stranger, in the midst of Lord and Lady Hughes’s ballroom, he opened himself up to public censure. His intentions were marriage to Lady Catherine Dennington, and any hint of untoward interest in another would not be countenanced by the Duke of Somerset or his daughter.

Geoffrey folded his arms across his chest. This American upstart might have a face and body to rival Helen of Troy, but possessed the uncouth manners one would expect of an American. “Miss,” he said from the corner of his mouth. “We’ve not been properly introduced; therefore, all manner of discourse between us is improper.”

Her lips twitched in what he suspected was mirth. “I would say toppling over the host’s servant and spraying his guests with champagne and glass is also improper, but you’ve done that, sir,” she said, her voice as dry as the crisp leaves in autumn.

Geoffrey felt heat climb up his neck, and resisted the urge to tug at his suddenly tight cravat, shamed by  the accuracy of her charge. He did not create scandals. Not anymore. He was proper. And poised. And…

She arched a brow.

Well, in this instance he’d created a small scandal. Still, he needn’t raise further eyebrows by talking to the vexing miss.

Even if he wanted to.

He needed to go. Immediately. Anywhere but within mere inches of the lady who smelled like lilacs and lavender and now champagne. “Again, forgive me for causing you distress.” He bowed deeply and beat a hasty retreat.

Geoffrey had made a fool of himself once over a young lady. He’d not be so foolish again.
Posted by Unknown at 12:00 AM