My fourth book, Weekends in Carolina, came out last week and I'm super excited about it! It's set in Durham, North Carolina, where I live, which gives this book a special place in my heart. Plus, I love the cover, which says so much about the book. 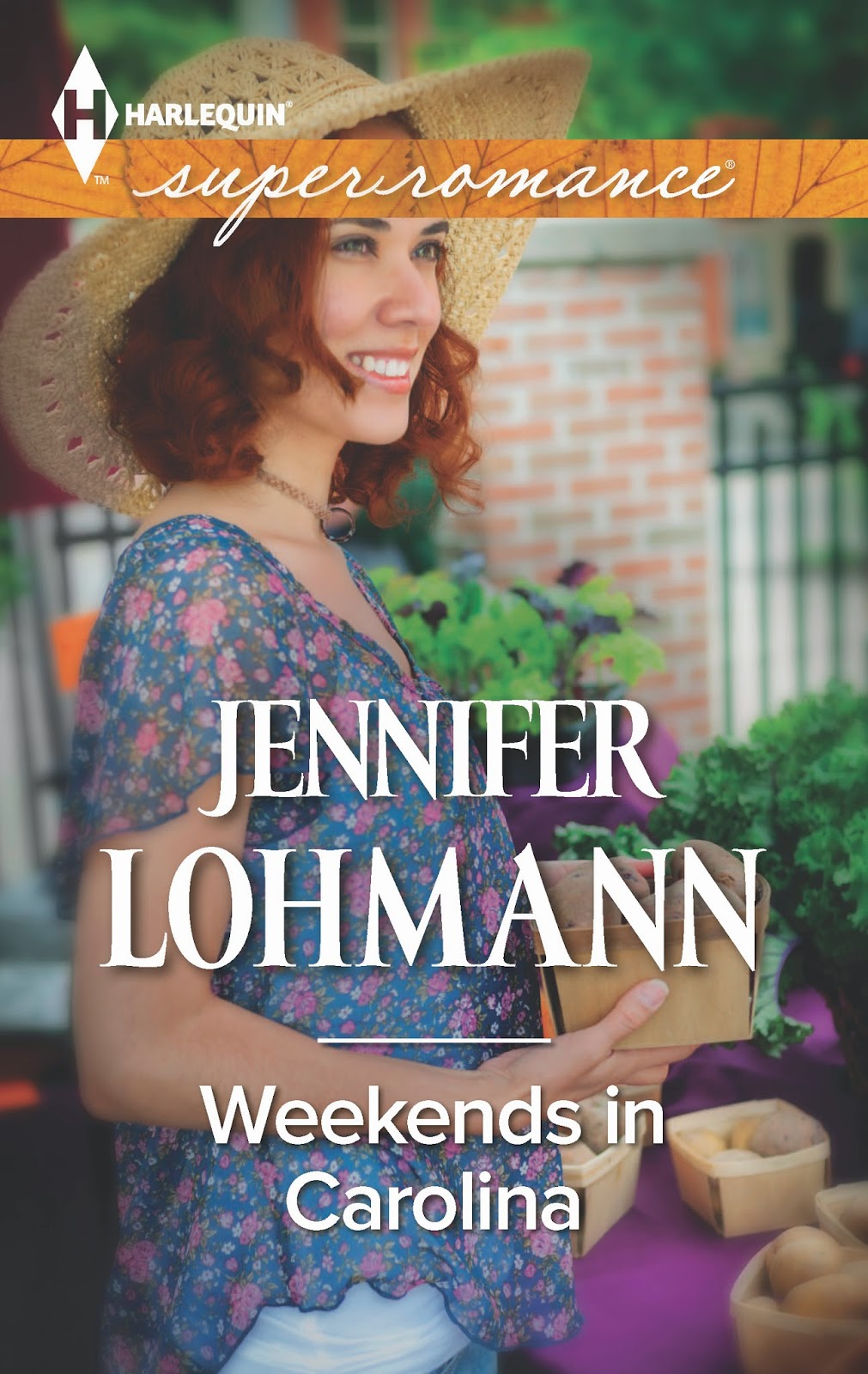 Wishing the weekend would never end!
Trey Harris wants nothing to do with his late father's farm. In fact, he can't get rid of it fast enough so he can enjoy his city life. Then he meets Maxine "Max" Backstrom—the gorgeous woman leasing the land. Between her passion for his family's farm and her determination to show him its beauty…well, Trey can't stop thinking about what it would be like to kiss her!
Still, their lives are worlds apart. If he sells, her livelihood vanishes. But his interests aren't here. And no matter how magical their weekends together are, this can't lead to anything…can it?


Trey would have bet substantial amounts of money that he would never have found a woman shooting tin cans with a .22 attractive. Or, for that matter, any woman standing behind his father’s house. This woman was evidence that he would have lost both wagers.

He couldn’t see her face, but she had a ferocity to her stance, legs set apart and knees slightly bent, elbows sharp and dangerous, and he could describe the pinch in her facial features without her having to turn around. Her mass of curly, carrot-colored hair was barely contained by the knot she’d tied it in, and the baseball cap it was shoved under was doing nothing to help lash the masses together. She must be keeping it out of her eyes by sheer force of will, as the wind blew wisps of curls everywhere but in front of her face.

Trey was surprised there was enough country left in him to find a woman in work boots attractive. Another bet he would have lost.

Whoever she was, her jeans skimmed over her tight butt before disappearing into her boots and he was enjoying the way her shoulder blades poked through the white cotton of her T-shirt. And the way the surprisingly bright and unseasonably warm sun of a January day in North Carolina bounced off the freckles on her arm. Only a small amount of bare skin was visible, but what he could see was more freckle than not.
She pulled the trigger and the “P” in one of the Pepsi cans disappeared before the can toppled over. The woman herself barely flinched. Trey had just taken another breath and she shot the next can. Given the pile of fallen cans and the near-empty box of fresh targets, the woman had been out shooting for a while. He was loath to interrupt her to ask where Max was. Not only was he enjoying the view, but she was an angry woman holding a rifle. Trey knew nothing about Max and his competencies, but Trey’s father had certainly been capable of making a woman angry enough to shoot any human with a Y-chromosome, even from beyond the grave. God knows Trey had spent much of his childhood escaping his house to punch trees while his mother had practiced her bland smile.

Clip spent, the woman put the rifle on the seat of a lawn chair and stalked to the line of dead cans.

“Hey,” Trey called out as he walked to the chair. She didn’t turn around or give any other indication that she’d heard him. His mother’s lessons, always at odds with his father’s example, had been to be polite and respectful to women, but he couldn’t yell “pardon me, ma’am” with enough force to get the woman’s attention, so he reconciled himself to a rude, “Hey, you!”

The woman started, knocking over the pile of dead cans she had constructed. When she looked up at him, his spine tingled in response. Even through sunglasses, the force of her stare caught him off guard. As far as he knew, she wasn’t supposed to be on his father’s farm, much less here shooting cans. Or was it his farm now? Or maybe it was Max’s farm. It didn’t matter who owned the property at the moment. This woman wasn’t supposed to be here.

She straightened then reached up to her ears with both hands and pulled. Two small bits of orange foam bounced off her shirt, just above the rise of her breasts.

Of course she couldn’t hear him. She’d been wearing earplugs. It had been so long since Trey had stood in his backyard and shot at cans that he’d forgotten some of the basic safety precautions.

She marched up to him, her stride as direct as her stare. After they were no longer in shouting distance, she lifted her sunglasses off her face, folded them into the neck of her T-shirt and said, “You must be Trey Harris.”

The woman walked quickly. By the time she had finished speaking, she was directly in front of him. The part of Trey that had been admiring her backside also noticed the peaks of her nipples pressed against her shirt—even if it was a warm, sunny January day in North Carolina, it was still a January day. But Trey wasn’t a complete caveman; he also noticed that she had clear, mint-green eyes.

“You have the advantage of me,” he said, focusing his attention on her arresting eyes. For all that the rest of her was easy to look at, her eyes—and the straightforward way she looked at him—were mesmerizing. She was daring him to look away and he couldn’t. “You know who I am, but I don’t know who you are.”
Or what you’re doing here.

Her straight, pale eyebrows crossed in confusion. “I’m Max Backstrom,” she said without offering her hand.
“You’re Max?” A couple years ago, Trey had asked Kelly if his boyfriend had known he was spending so much time with Max. His brother had choked with laughter—and now Trey knew why.

Her confusion didn’t last. She lifted one eyebrow, this time daring him to argue with her, and he didn’t accept this challenge, either. This woman was his father’s farmer.

Have you ever been mistaken for someone incorrectly, or mistaken someone else?

I'll be giving away a print copy of Weekends in Carolina. US winners only. Void where prohibited. Comment to enter. I'll run the giveaway from today until June 20th*, posting the winner on the 21th. Please include your email so I can contact you about your prize.

*edited to fix the month